A philosophical theory or approach that emphasizes the existence of the individual person as a free and responsible agent determining their own development through acts of the will.

Taped in front of a live studio audience.

It has been quite a while now since I first began dissociating from my work. I have finally succumbed to the universal somnambulism. It’s a well-known fact that we anesthetize the domination of our lives by our jobs with sleep. Not literal sleep, of course. I now fall asleep with the optimistic electronic chirp of the timecard reader like everyone else, even though I work, laugh, and chat throughout my nine-hour day like any functioning human. I remember a time when it was different. Once it was worse. Once I wasn’t permitted the cold solace of sleep. Once I had a job that forced me to face the spectre of mortality in all its grandiose contradictions. Like any one of the paradoxical lines in the poetry of John Donne, the job forced me to remain awake.

I was a hospital phlebotomist at the time. I drew samples from patients in their sardine-can cells and took the blood downstairs to the lab in a soul-deadening daily exchange of elevator ascents and descents. This repetitive aspect should’ve kept me sleeping since it was the same lullaby that you find evenly distributed in all the occupational quarters like powdered pesticide. Only one force was strong enough to counter the anesthesia.

I discovered it one morning at about a quarter to twelve. I was on the cardiac floor. It was just before lunch and I was getting impatient. Not that the hospital food was any good—au contraire, it was damn awful (the chicken-gristle sandwich sans-condiments was legendary around that time). And it wasn’t that I was particularly interested in seeing my coworkers—all the same sleeping faces circulated both the cafeteria and the floors with soul-deadening regularity. Lunch was, however, the only period in my twelve-hour workday during which I could read. Only one more patient lay between me and my book. Let’s just get it over with I told myself encouragingly as I opened the door to a heavily curtained room.

“Hello, I’m from the lab,” I said, with as much zest as the particular situation could reasonably call for. “Your doctor wants me to draw a blood sample.”

The man on the bed was in his late fifties. Gray, unwashed hair curled above his pale 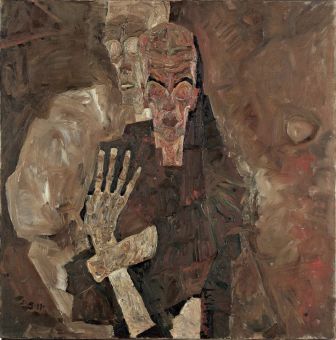 temples. Beads of sweat sparkled under the fluorescent lights across the waxy surface of his forehead. The room simmered in the faintly repulsive redolence of unwashed and unmoved biology, the nauseating sweetness of bodily crevices hoarding soured perspiration.

I noted the smell with passive disinterest. Smell, after extended exposure in a hospital setting, only gives rise to the accompanying biological reactions (retching, nose-pinching, actual vomiting, in rare cases) when it is particularly vile—as in, for instance, the unforgettable and infamous case of a particular legless prostitute’s infected colposcopy bag. What was more unusual about this patient was his stillness. END_OF_DOCUMENT_TOKEN_TO_BE_REPLACED