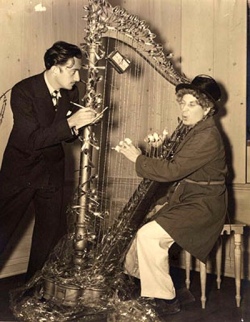 Since their inception as on-screen personas, the Marx Brothers appealed to surrealists. Antonin Artaud hailed “the powerful, total, definitive and absolute originality” of Marx Brothers films. Ionesco, the French avant-garde playwright, equally admired them. In addition to winning over audiences worldwide, the brothers found themselves as strange icons for artists on the fringes of polite society.

The Marx Brothers—Groucho, Chico, Harpo, and Zeppo—shared absurdist sensibilities with the Dadaists and Surrealists. Their plays and movies contained absurd or nonsensical, surreal or anarchic themes or moments. From Groucho’s absurd songs and speeches to Harpo’s clownish antics, their films contained one strange or absurd bit after the other: real dogs popping out of chest tattoos, bizarre contract negotiations, and constant challenges to authority and social norms.  Avant-garde artists sensed a kinship with the Brothers’ sense of anarchy, rebellion, and, at times, anti-art.But none appreciated them more than Salvador Dali, who especially adored Harpo, the mute clownish brother. “[Dali] was in love with my brother,” Groucho later joked. But if it wasn’t love, it was adoration—sincere appreciation for a performer whose work Dali viewed as an “anarchistic form of rebellion against modern society.”

Dali may have also sensed a bit of himself in the silent brother. Harpo’s persona could affect childlike innocence and mature, even sadistic, hedonism. He could play harmless pranks one moment, chase women the next, attack people in bouts of aggression or cruelty, and, although mute, demand attention. Aside from a lascivious obsession with women, Dali shared these traits with Harpo. In his autobiography, the famed surrealist painted relayed tales of appalling cruelty he inflicted on people, sometimes for the sake of garnering attention.

Since childhood, Dali found himself mesmerized by film. He adored early greats such as Charlie Chaplin and Buster Keaton. Film also helped his career as an artist. He and director Louis Buñuel generated international attention when they collaborated on Un Chien Andalou in 1929. The film was avant-garde to its core. It didn’t follow any central characters or pursue a coherent story. Instead, it consisted of surreal and phantasmagoric images. In a sense, it’s less a film—at least in any traditional sense—and more of a dream, or a series of surrealistic paintings and photographs come to life.

As an admirer of film, Dali sought to make his mark beyond Un Chien Andalou. He loved American cinema and claimed it promoted the works of the only legitimate American Surrealists: Harpo Marx, Walt Disney, and Cecile B. DeMille. He’d meet all three in the mid-1930s and collaborate on an animated film, Destino, with Disney in the mid-40s. Although their collaboration fell by the wayside, it was picked up and completed in 2003.

Director Alfred Hitchcock gave Dali his big break in American cinema in 1945 when he hired the surrealist to design a dream sequence for the film Spellbound. The sequence is classic Dali, featuring imagery plucked straight from the subconscious. Along with Destino, it’s as close to a pure Dali cinematic experience that we’ll get.

But a decade earlier, in 1936, Dali conceived plans for a feature-length film after befriending Harpo Marx. In his typical over-the-top fashion, Dali described his meeting with Harpo in Harper’s Bazaar magazine a year later,

“I met Harpo for the first time in his garden. He was naked, crowned with roses, and in the center of a veritable forest of harps (he was surrounded by at least five hundred harps). He was caressing, like a new Leda, a dazzling white swan, and feeding it a statue of the Venus de Milo made of cheese, which he grated against the strings of the nearest harp. An almost springlike breeze drew a curious murmur from the harp forest. In Harpo’s pupils glows the same spectral light to be observed in Picasso’s.” 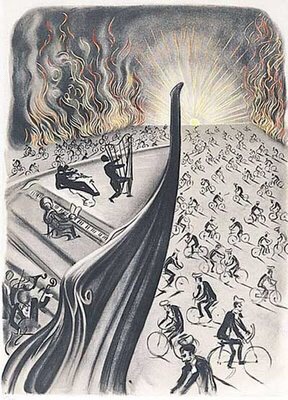 Whether or not the meeting, as Dali described it occurred, he and Harpo did meet and strike up a friendship. Dali sketched Harpo and later seen him a surrealist harp, fitting with barbed wire instead of strings. As their friendship grew, they conceived a Marx Brothers film, which Dali would write. Giraffes on Horseback Salad or The Surrealist Woman took the brothers’ antics to bizarre and Dalinian new heights. If made, it would have been Animal Crackers or Duck Soup on a cocktail of acid, salvia, and DMT.

The Marx Brothers had a contract with MGM and the studio refused to make the film. For years, Dali’s treatment was lost, but in 1996 it was unearthed. The film loosely centered around a “surrealist woman,” to be played by Dali’s wife Gala, and the Marx Brothers’ antics with her and a Spanish businessman. It would have been unlike any film made before or since, complete with unbelievable imagery—one wonders how Dali expected to pull off some of his imagery given the limitations of special effects technology in the mid-30s. If the studio had agreed to make it, Giraffes on Horseback Salad would have been a masterpiece of the absurd and surreal, and it may have established a high watermark for American avant-garde filmmaking.

Although we’ll never see the film as Dali imagined, we can read his treatment—which you can find below—and study his few illustrations and picture what might have been.

The “Surrealist woman” is lying in the middle of a great bed, sixty feet long, with the rest of the guests seated around each side. Along the bed, as decorations, are a group of dwarfs caught by Harpo. Each is supported on a crystal base, decorated with climbing flowers. The dwarfs stay as still as statues, holding lighted candelabras, and change their positions every few minutes.

While love tears at Jimmy’s heart, Groucho tries to crack a nut on the bald head of 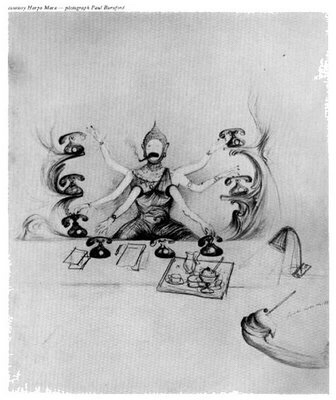 the dwarf in front of him. The dwarf, far from looking surprised, smiles at Groucho in the most amiable way possible. Suddenly in the middle of dinner, thunder and lightning begin inside the room. A squall of wind blows the things over on the table and brings in a whirl of dry leaves, which stick to everything. As Groucho opens his umbrella, it begins to rain slowly.

Although the guests show surprise, they try for a time to continue their meal, which is, however, brought to an end by showers of rain. In a panic, the guests rush in all directions, while from the hall a torrent of waters washes in, bringing with it all sorts of debris, including a drowned ox. A shepherd makes a desperate effort to collect his flock of sheep, which climb up on the sofas and the bed in an effort to avoid being carried away by the water. A cradle is carried in on the flood containing a baby crying piteously, followed by the mother, hair streaming behind her.

The “Surrealist woman” crosses several rooms – rain falling more and more heavily – but stops in front of a door and hesitates. She goes in, followed by Jimmy, who has never left her side. On the other side of the door, there is no more rain and everything changes. It is the childhood room of the “Surrealist woman,” whereby her orders nothing has been touched since she was ten. Overcome by emotion, she sits down in front of a mirror at a child’s table.

Meanwhile, the Marx Brothers announce that a great fête is going to take place. For this, large preparations have to be made. Four acres of desert are cleared of cacti and of all vegetation and flattened out like a tennis court. The undergrowth that is cleared away is piled around the field to make a barrier, behind which stands are erected for spectators. 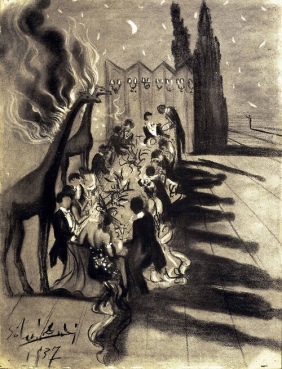 There is a competition for the person who can ride a bicycle the slowest with a stone balanced on his head. All the participants have to grow beards. In the middle is a tower in the form of a boat’s prow to be used as a judge’s box.

Before the spectacle begins, the vegetation around the fields is set alight. This prevents the spectators in the stands from seeing anything at all. From the top of the tower the sight is wonderful, with columns of smoke going up vertically, surrounding hundreds of cyclists—each balancing a rock on his head—threading their way with the sun setting behind.

In the tower, Harpo is playing his harp ecstatically, like a modern Nero. By his side, his back to the spectacle, Groucho is lying, smoking lazily. Nearby, the “Surrealist woman” and Jimmy watch the spectacle, lying side by side. Behind them, Chico, dressed in a diving suit, accompanies Harpo on the piano. Scattered across the gangway leading to the tower, an orchestra plays the theme song with Wagnerian intensity as the sun sinks under the horizon. 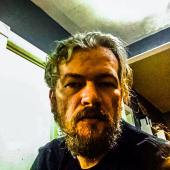 Daulton Dickey is a novelist, poet, and content creator currently living in Indiana with his wife and kids. He’s the author of A Peculiar Arrangement of Atoms: Stories, Still Life with Chattering Teeth and People-Shaped Things, and other stories, Elegiac Machinations: an experimental novella, and Bastard Virtues, a novel. Rooster Republic Press will publish his latest novel, Flesh Made World, later this year. Contact him at lostitfunhouse [at] gmail [dot] com