I’ve vilified the space between my eyes and my face
The soft-boiled sky sheds purple hues on the city,
On two clowns with pool-cue eyes rubbing through crowds clotting the streets below;
They carry a crucifix, lying horizontally,
Over their heads
And cackle the robbery of dissent

People howl
Pebbles, stones, twigs, glow and greet the opportunity to eagle through the air,
Perched on a path to the clowns,
Who ignore the pain, and the crispness of the crowd,
As they reach the city center and plant the crucifix in a pyramid of dirt erected in an intersection,
They stand nose to nose at the base of the pyramid
And ricochet thoughts snaking between their pupils

The clown on the right, with a red nose, reaches into the other clown’s mouth
Beneath his blue nose,

The other clown watches the hand, then wrist, then forearm jackhammer him from the inside

A shift in dialect from Red Nose, who’s cackling,
Threatens the air—and the crowd droops and watches,
Captivated

They stretch the cloud and the oxygen and, screeching,
Slam them together,
Hastening a crystal figure

They trampoline the figure onto the crucifix,
And it hangs on a triangle of nails

Cawing, the clowns raise their arms and shout gibberish
Each person in the crowd drops to the ground and sculpts the half-lotus position
They murmur and mimic the gibberish
Soon, a new language evolves:
It steers and divides the crowd into bite-sized morsels 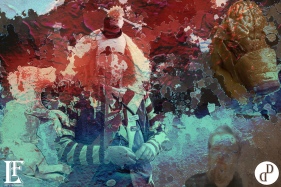 Rain perverts the papier-mâché sky—
Paste and paper rain on the crucifix, the clowns, the crowds
Then wind Billets the clowns,
Passing the crowds altogether

A tornado soon embraces our interlocutors
Formed of rain and wind, paste and paper,
It spirals around the clowns and dissolves
In the storm’s wake,
We can see They took their leave

Silence;
Then Someone in the crowd stands, fisheyes the people, shouts gibberish,
And everyone remains seated
Eager to learn the mysteries of excrement
Hardening in the sun 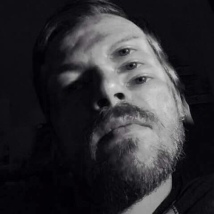 Surrealist Daulton Dickey lives with his wife, kids, and pet human-lizard hybrid in a universe he created. He’s the author of Elegiac Machinations, Bastard Virtues, and Flesh Made World, Contact him at lostitfunhouse [at] gmail [dot] com