Salvador Dali swore he remembered life inside the womb. He called his recollections “intra-uterine” memories. Two images he claims to have seen inside the room later reminded him of eggs.

Eggs helped to define his style: imagine a timepiece as soft and flimsy as a fried egg. Imagine how’d it look if you laid this timepiece on a branch or on the edge of a table. Such perversions of reality led to his 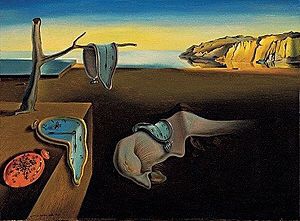 most famous painting, “The Persistence of Memory,” indebted to eggs—and Dali’s insistence that he could remember life inside the womb.

He made brilliant, always unexpected associations. Even if we bracket his wild claims—such as remembering the womb or biting off the head of a dead bat to shock a maid—we can discern a method to his singular vision. Dali himself explicitly tells us how to do it.

“My paranoia reversed the order of physical values,” he wrote (Maniac Eyeball: 81), “for to me effects can just as well be causes. I shortcircuit the logic of reactions by introducing irrational elements into the chain so as to cause mutations.”

The woman lies nude with her eyes closed, unaware of the pomegranate floating beside her. A bee buzzes around it. Hovering in the distance, the size of a mountain, a pomegranate decays. A rifle, a fish, and two tigers emerge from it. The rifle races toward the sleeping woman as the tigers leap to catch up. They roar; one rears its head back as a giant fish gives birth to it via mouth. In the distance, an elephant with legs as long as a four story building lumbers—with grace, somehow. Its feet produce a thud sound whenever they hit the ground. Everything floats: rocks, the pomegranate on the ground, even the woman. 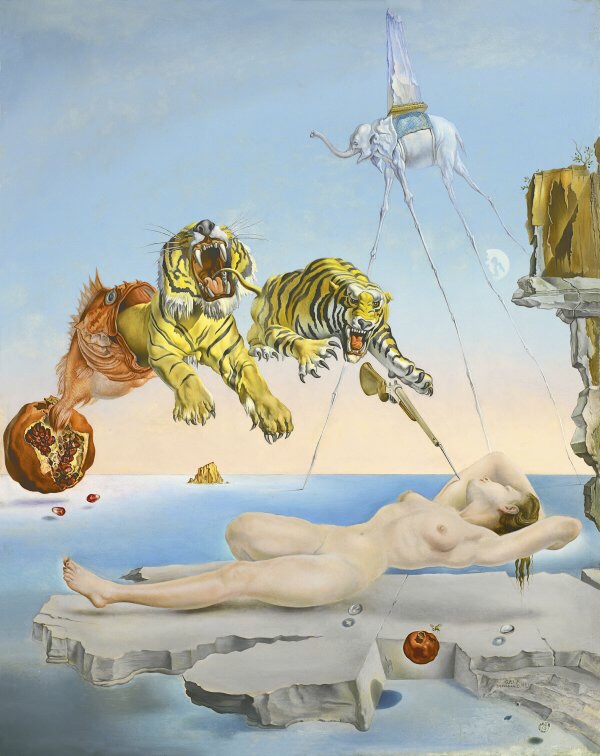 The title of this painting, “Dream Caused by the Flight of a Bee around a Pomegranate,” gives insight into Dali’s method, and the key to interpreting much of his work.

Here, he connects two disparate occurrences—a woman dreaming and a bee flying around a pomegranate—and from these connections he draws inferences, shifting the foundation of the universe.

Dali himself was the cause of a series of effects: his pathological fears and timidity, his eccentricities, his fanatical self-absorption developed naturally. He later mastered the art of persona by teasing out and exaggerating his quirks. This allowed him to mask his shyness and timidity, and it also strengthened his confidence and inspired to him to hone his craft by following in the footsteps of the old masters.

If you’re going to speak and behave like a genius, then you’d better master something other than public relations.

He would put off succumbing to his desires until a designated day, fighting his sexual urges by focusing his attention on developing and perfecting his craft.

He liked to portray himself as almost asexual, yet sexual perversion permeated his life and work. It sometimes veered into the grotesque, the scatological—but it always centered on his, and only his, gratification.

His soft head slumps forward until it disfigured itself.

Eye closed, his nose touches the ground. A grasshopper, covered with ants, copulates with his mouth as the lower part of the back of his head and neck protrudes and assumes the shape of a woman, in a dreamy state, eyes closed, moving forward, toward a man’s crotch. He’s wearing tight underwear, which betrays the shape of his genitals.

Throughout his life, Dali possessed a pathological fear of venereal disease, so the thought of sexual conquests exhilarated and terrified him. Such contradictions took a toll—and fueled his work. He cultivated an ability to tease out facets of his psyche to which most people remained blind, an ability enabling him to manipulate worldviews.

Combining these and other elements, he developed a technique he called The Paranoiac-Critical Method, in which he sought to cultivate paranoia, a state to which he claimed to slip into at will.

He also triggered other experiences to amplify his anxiety, and a clever way to conceal it—by wearing shoes two-sizes too small. He writes about it in Diary of a Genius: in order to sit and write in “Dalinian” fashion, experiencing anxiety and irritability allowed him to amp up his persona.

He claimed to wear those same shoes while giving public speeches. This technique assured an animated figure. His shoes, too tight, inspired him to move, move, move, generating the appearance of unstoppable energy. It also affected anxiety, irritability, and so on. Yet he channeled it and used it to help define his persona, which then informed his art.

In effect, he had merged with his art.

You can’t separate the two. This isn’t always the case with artists, but it allowed those like Alfred Jarry, Dali, and Warhol to stick out.

He had—physically and mentally—transformed into an amorphous blob. But he had also mastered shape-shifting, which played a significant role in the development of both Dali the persona and Dali the craftsman. Together, those two facets produced the artist.

By analyzing his psyche, he also proved himself capable of stepping outside himself to view himself, to pick himself apart, and to exploit his findings. He reveled in peoples’ inherent contradictions, and he work to tease his out, to understand and profit from them.

A man in a velvet suit lumbers down a sidewalk clotted with commuters. He jerks his hands and arms, holds them close, reaches over and scratches his neck. Sweat pours down his face. They should move faster. Everyone should move faster and get out of my way.

The impulse to scream at the people surrounding him, to order them out of his way, hit him like a bolt of lightning. Why don’t they move? or speed it up? People aren’t courteous anymore; they think only about themselves and the boosts of dopamine and serotonin their sensory-addicted lives provide them.

A man with a briefcase replacing his right hand bumps into the man in velvet. Briefcasehand doesn’t even glance back. He glides over the sidewalk, acting as if the past doesn’t exist. It’s too much. Too much.

Screaming, the man in velvet morphs into a polar bear: it stands upright and raises its arms, fracturing the light. Then it roars. Nearby walls and windows ripple. But the people surrounding it glare as if it’s a man suffering a nervous breakdown—eyebrows furrow, lips curl, eyes narrow or open wider.

Then they re-enter the womb incubating and nourishing self-absorption. Roaring again, the bear feels a similar womb close around it. It roars again, then dissolves and reforms inside the womb.

Dali knew when to enter the womb. He also knew when to destroy and rebuild it before entering into it. In short, he learned how to form and mold his personality as well as his artistic vision. It’s worth heeding his lessons: we can resist change, we can lose ourselves in it, or we can dictate and control it.

And, if we pay close enough attention, we can channel the experience itself it something potent and magical—art.

Surrealist Daulton Dickey lives with his wife, kids, and pet human-lizard hybrid in a universe he created. He’s the author of Elegiac Machinations, Bastard Virtues, Flesh Made World, and Dig the Meat Music (forthcoming from Nihilism Revised) Contact him at lostitfunhouse [at] gmail [dot] com