You could argue that every art movement since the mid-to-late nineteenth century is either predicated on or incorporates some sense of perversion. If we use “perversion” is the sense of an unorthodox approach, then modern art is explicitly founded on it. Institutions dictated what constituted art—and they did so with an iron fist: you could only paint in a studio, not outdoors; you had to hide your brushstrokes; you could only depict historical or didactic scenes or imagery, and so on. Institutions dictated style and form and, to a degree, content.Few artists experienced freedom in any meaningful sense. Institutions and the culture empowering them essentially locked artists in a room with a list of Dos and Donts affixed to each wall. Then they told the artists they were free to do whatever liked as long as they stayed within the confines of the room and treated the Dos and Donts as dogma.

Individuality received a huge boost as feudalism gave way to the industrial revolution. In the new industrial epoch, the world changed rapidly. A perceptive person could stand back and watch the change in action. Since artists hone their eyes to pick up details and nuances most people give little attention to, it’s little surprise that some in the artistic community saw beauty in the changing world of modernity and wanted to capture its tone, tenor, and imagery.

The ancient Greeks had developed a facet of art called mimesis. This represented idealized forms. If you painted a woman, for example, you didn’t paint her as she was; instead, you presented her in her ideal form.

Institutions well into the nineteenth century demanded ideal representations of people and objects. Some say modern art began with Edouard Manet’s painting Luncheon on the Grass (1863). This painting challenged the conventions by perverting every standard. The subjects appear almost on top of each other. They don’t appear to sit or touch in the ground. Manet perverted the proportions of the spatial relations as well as the people he depicted. In the background, we see a woman in a pond but she remains proportional to the men and woman in the foreground—as if she’s a giant or hovering over them. He also eschewed depth and three dimensions by producing a flat, almost two-dimensional composition.

Luncheon on the Grass

Critics and the elite pounced on Luncheon on the Grass. They saw Manet’s stylistic choices as neither conscious style nor radical. Instead, they viewed it as the work of a man with little talent and no grasp for refinement and technique. In addition to criticizing everything mentioned above, the critics pointed out what they perceived as his poor understanding of lighting and shadows. They even targeted the content: it was modern, tawdry, and depicted people on the lower rungs of the social ladder.

It’s hard to look at Luncheon on the Grass now and appreciate its revolutionary approach. We’ve seen far stranger, obscene, darker works in the intervening century and a half. To view it now, we might see a simple painting, something you might see on the cover of a historical novel. We can’t see it for its controversy, its rebellion, its anarchy.

Few people in 1863 interpreted it as such, either. Most people serious about art dismissed it as a poor attempt by an artist lacking craft, skill, and refinement. Only those sympathetic to Manet’s ambition, to his desire to enter the graces of the institution on his terms, saw the painting as a masterpiece of transgression. It perverted nearly every established rule—and it did so with grace, beauty, and an uncompromising vision.

If modern art doesn’t begin with Luncheon on the Grass, then some critics and historians date its birth to 1865 and a painting entitled Olympia—also by Manet. A man of ambition, Manet intended to work on his terms—and he altered the history of art by doing so. You could argue that his vision and ambition kicked off a revolution still churning along today.

In an age of internet pornography and graphic art, it’s difficult to associate a painting like Olympia with sexual perversion. People in the nineteenth century, however, had little trouble making such an association. Manet’s painting wasn’t just bold or risqué—it was outright scandalous.

In a sexually repressed society, where decent and polite people didn’t openly acknowledge the existence of sex, openly portraying a prostitute on a chaise lounge challenged every notion of sex and sexuality. Specifically, it challenged the hypocrisy of a society engaging in sexual behavior and denying it through omission. Yet this was also a society in which a concept such as prostitution endured. Not simply a relic of the ancient world, prostitution served as a functioning facet of then-modern society.

Some men may not have engaged in perverse sexual behavior with their wives, but they could do whatever they liked with a prostitute. Some men visited prostitutes as an alternative to “sullying” their wives. Some wives probably even knew about their husband’s flings. But in polite society, neither party spoke of it—at least not in public.

Manet’s Olympia challenged such behavior openly, for all to see. Several images identified the subject as a prostitute in her parlor—the pearl necklace and the black cat, both of which symbolized prostitution. Even the name of the painting itself, Olympia, was slang used to denote prostitution. 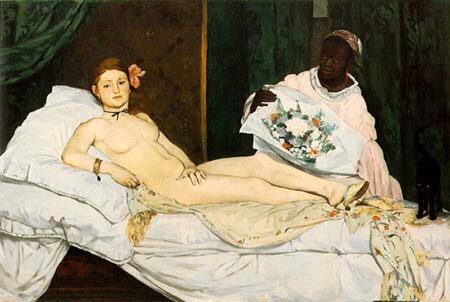 As viewers gazed on the painting in disbelief, they confronted the reality of life, passion, and desire. To those who engaged with prostitutes, and to their wives, Olympia must have shamed and outraged them. Here was a woman gazing at you with determination. She displayed her body as it was, largely without adornment. Covering her crotch with her hand, she also seemed to imply ownership: you, the client, could only gaze at it, could only access it, for a price. The gesture is a beautiful detail, almost feminist in its meaning: it implies independence in lieu of fear or timidity. The subject of this painting knows who she is and what she wants—and she’s not compromising or giving it away for free.

I wrote a more in-depth piece about this painting elsewhere so I’m going to narrow my focus here on the painting and its implications.

The Origin of the World (L’Origine du monde) by Gustave Courbet illustrates the power of composition. The human body in and of itself isn’t obscene, perverse, or scandalous. How people map those concepts to art depends on how the artist frames the human body. In this case, the composition dehumanizes the subject and focus solely on her vagina.

It’s interesting to note how little of the model’s vagina Courbet depicts. Pubic hair dominates it. We’re only allowed a glimpse at the flesh running beneath the hair. Yet this painting was so radical, so perverse and controversial that few eyes fell on it for more than a century. As with Olympia, The Origin of the World’s perversion relies on two things: 1), the boldness of the artist; and, 2), the observer.

We’ll bracket this line of thought for a moment to shift our focus to another piece, Venus Victrix, and how context helps define perversion.

Venus Victrix and the Bourgeoisie

Leaping back to the early nineteenth century, we can better understand the temporal nature of perversion if we pause to examine a neo-classical sculpture, Venus Victrix (Venus the Conqueror). A white marble portrait of Pauline Bonaparte created by sculptor Antonio Canova, this seemingly innocuous sculpture generated considerable controversy in the first decade of the nineteenth century—and that controversy centered on breasts.

Nude sculptures of ancient goddesses weren’t rare or controversial. However, the model for Canova’s work set Venus Victrix apart from classical and neo-classical sculptures. Pauline Bonaparte was a member of the bourgeoisie. For a woman of high society to bare her breasts in a sculpture caused a scandal and controversy that embarrassed her entire family.

Traditionally, women of high society wore drapery or clothing when they modeled for paintings or sculptures. Bonaparte, however, wanted something different. She didn’t want a standard portrait. She probably wanted something better: a way of expressing her personality and her individuality. Rumors of her promiscuity swirled long before she posed for Canova, so the sculpture probably didn’t surprise some people. 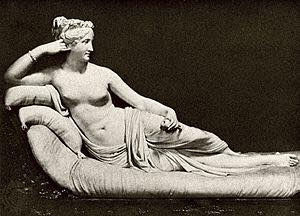 You can read “perversion” in several senses: to twist rules, to refuse to conform or to adhere to orthodoxy, to express or exhibit abnormal or atypical sexual fetishes or desires. Despite the sense in which you might use “perversion,” the period in which you use it defines the subject, object, or concept as perverse. Nothing about Venus Victrix or Olympia strikes a modern viewer as perverse. In their respective times, however, people could use the word to express two senses: unorthodox and sexual perversion. While most people use “pervert” and its derivations in a negative sense, the words could express neutral emotions, especially when rule-breaking defines its use. In this sense, think of a pervert as a rebel who follows through with their plans—i.e., perverts act and rebels bullshit.

In the next installment, we’ll focus on perversion as a revolutionary act when we visit the Impressionists and the so-called Post Impressionists. From there, we’ll study sexual perversion in the twentieth century.