(Hammond, IN) With an infectious smile 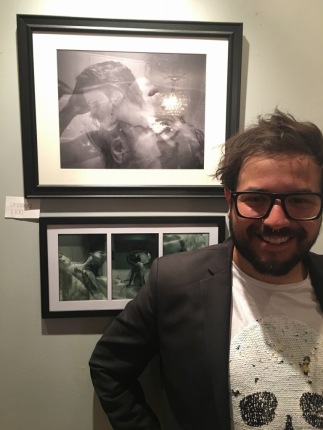 Martin Navejas greeted us at the entrance of the White Ripple Gallery in Hammond. This would be Martin’s second solo exhibition and if he was nervous you could not tell. We moved slowly up a flight of stairs passing the art work of what I assumed were other artists to be featured at the gallery. We arrived in a huge room at the top of the stairs and along the walls the work of the 27-year-old artist hung.

I walked around the room taking in his work, most were nudes with both men and woman. What struck me about Martin’s work was not just the level of nakedness the models have but where the pictures were actually taken. To Martin the locations where he takes the pictures are just as important as the models and in some of his work it’s almost as if the model is secondary and the location and is the main subject, like the abandoned church confessional that was used in one of his pieces.

Born and raised in Hammond, Indiana, Martin Navejas has been taking pictures since he was a teenager, saving his allowance to buy disposable cameras and pay for film developing. Inspired by other photographers pictures of abandoned buildings, Martin started ditching school and ‘breaking into’ empty and abandoned buildings in his hometown and in other locations to get his own pictures.

After awhile accompanied by his friend Tia he would put her into his early work, then a natural progression to other models as his work evolved. “I’ve always wanted to tell stories, but I’m not a good writer or speaker, so I thought I could do it through my photography.” When asked what inspired him I was surprised when he said music and poetry. “You would never think that inspiration comes from a song that I hear but in my head it works.” Indeed it does as Martin puts a visual to what he hears. Martin describes striping the model down to their bare essentials just like the abandoned locations that he uses as a backdrop. Referring to his body of work, “There’s a story you can make up in your head.”

When I asked Martin what he says to a person that cannot differentiate or compares his works of art to pornography he had this to say. “I feel like maybe this is just me, but I feel if you take away the clothes, the mask, if you will, essentially I think working with the naked body, they (the model) are more vulnerable. It’s more genuine, it’s more raw.” Using physical structures that have been abandoned by man and taken over by nature seems to make the body of his work genuine for both location and model, naked bones bare. His work can come off as sad and lonely but almost romantic and beautiful at the same time.

Martin Navejas is an upcoming young gay artist that is putting his mark on art and culture in Northwest Indiana with his thought-provoking and provocative work.

This article was reprinted with permission. It originally appeared on The Beacon by Out in Michigan City, the preeminent site for the LGBTQ+ community in Northwest Indiana. Visit the site by clicking here.

John Martin Livelsberger is a writer. He lives in Michigan City Indiana with his husband Chris, their pugs, two older dogs Dylan and Nicholas and a couple of cats that just happened to wander in.