So I’m sitting in my car outside work. Lunch hour drags when it’s hot outside and you forgot your lunch. I debate driving across town to grab a bite, but I’m neither hungry nor motivated enough to expend the effort.

Voices on the radio chatter, something about an ‘incident’ somewhere over the east coast or New England. I focus on the story but the ‘incident’ remains ill-defined. 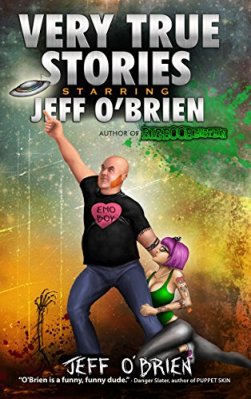 my library. One stands out: a woman kneels beside a heavyset bald man, who’s standing and thrusting his arm in the air. The title? Very True Stories Starring Jeff O’Brien.

What the fuck is this?

I have no memory of buying this book.

I download the file and read the opening page: a dude looking to get laid takes home a creature disguised as a woman. Tentacles emerge from her pussy and morph into two women.

What in Christ’s name is this? And who the hell is Jeff O’Brien?

I blast through another story, this one featuring the rotted reanimated corpse of an interdimensional traveler we humans know as Bigfoot. This isn’t a horror story, though. It’s a buddy comedy. If Hollywood made it, they’d title it Dude, Where’s My Talisman?

The stories are fast-paced and entertaining. Light-hearted, they don’t convey cynicism or mean-spiritedness. They’re clearly the product of a writer who loves life, a fun-loving bloke who doesn’t take himself or his writing too seriously.

My mind recalls the title: Very True Stories. I call bullshit, I thought. If these stories are true, then I shit in the trunk of my car.

Chatter on the radio grows erratic, more intense. Shouts followed by screams. What the hell’s going on? Through the noise I make out something about an object of some kind. It’s glowing or pulsing or—

The phone in my hand heats up and vibrates. The screen ripples, as if made out of water. Voices emerge, saying something in a vaguely Massachusetts accent. The phone hovers above my hand and flies into the passenger seat. It shakes and transforms into fluid, viscous like used motor oil.

The fluid extrudes and expands and assumes the form of an amorphous blob. The blob shifts and contorts until it resembles a human. It emits screeches as fabric grows from its pores and forms a t-shirt and shorts.

I clench my eyes and turn my head, appalled. The cabin of my car smells like a cross between sauerkraut and pipe tobacco.

I keep my eyes closed. Something hits my lap and I flinch and yelp. When I open my eyes, I spot my phone on my lap—and a man in the passenger seat.

Bald with a beard, wearing a Deathstalker 2 t-shirt and clutching a package of Twinkies, the man grins at me.

—Who the fuck … What the fuck’s going on?

—Hey, man, he says, shrugging. —Your guess is as good as mine. He extends his hand. I reach for it, recoil, then reach for it again. We shake. —I’m Jeff, he says.

Jeff. The size. The bald pate. I turn on my phone and examine the book cover. No. It couldn’t be.

—Hey, he says, peering over to check out the image on the screen. —You bought my book. Nice.

He extends his hand again. We shake again.

I light another cigarette and try to calm my trembling hands. This doesn’t make sense. None of it makes any sense.

—You don’t happen to have a cigar, do you? he says.

I shake my head.

—I don’t understand any of this, I say. —How are you here, right now, in my car?

—What can I say, man? Shit happens. He gestures to my phone. —So what’d you think about my book?

—It’s a fun book, I say. —Entertaining. The premise is clever and the stories are absurd, but in a fun way. It reminds me of stories teenagers tell to try to one-up each other, to come up with the most absurd autobiographical stories they can. There’s a simplicity to I like. And it says a lot about you, I think. Here’s a writer without pretense, someone whose goal in writing seems to entertain. Solely entertain. You don’t seem to be an ego-driven pretentious asshole. I think you’re a fun-loving guy and it seems to show in this book.

—The tone of each story is great, I say. —It fits the content perfectly, and it reminds me of cheesy 80s horror comedies. House II comes to mind. This is clearly a book written with love and passion and a zeal to entertain by piling one absurdity atop the other. Is it art? Probably not. But who cares? I don’t think that’s the point. You seem to place absurdity and entertainment value above art, you seem to want to make people happy and laugh, and I think you deliver on that ambition.

Although it’s the middle of the day, the sky darkens. Light vanishes. The world vibrates.

—Shit, Jeff says, —I think that’s my cue to leave.

—But you just got here. 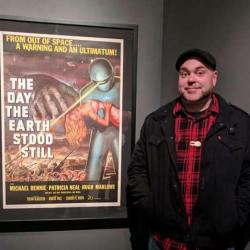 —I sense a tentacled monster wreaking havoc on a butcher shop in New England. They need my help.

I extend my hand. We shake.

The vibrating ground contorts my stomach and intestines. I feel a shit brewing, a bad one. An imminent one.

He glances around. —The trunk, he says. —Shit in the trunk.

—Are you high? You seriously want me to drop a deuce in the trunk of my car?

—No one’s around, he says. —I’ll stand back there, on guard duty, and to hide what you’re doing.

Darkness cradles the earth. I can’t see six inches in front of me. The ground rattles and voices in the sky moan.

Jeff and I amble to the back of the car. I open the trunk, drop my pants, and squat, hoping to drop my logs on an old blanket I could fold up and discard.

As the first shit dislodges from my ass, screaming fills the sky. The world strobes. Light replaces darkness. Jeff mutters something and fades. And I’m left sitting on my car, shitting into my trunk.

Before he disappears, Jeff says, —if you plan on reviewing my book, don’t forget to tell people that it’s one hundred percent true. And awesome.

His book is one hundred percent true. And awesome.

I glance around the trunk, searching for something—anything—to use as makeshift toilet paper.

Daulton Dickey is a novelist, poet, and content creator currently living in

Indiana. He’s the author of A Peculiar Arrangement of Atoms: Stories, Still Life with Chattering Teeth and People-Shaped Things, and other stories, Elegiac Machinations: an experimental novella, and Bastard Virtues, a novel. Rooster Republic Press will publish his latest novel, Flesh Made World, later this year. Contact him at daultondickey[at]yahoo[dot]com.