I woke in a void, empty. The room appeared as a mirage: both there and not there. Stumbling across the room to get dressed, then sneaking downstairs and closing the door behind me, certain not to wake my wife and baby, I floated in a state devoid of thought. A machine running on autopilot. Our dog stood in his kennel, whimpering. I let him out and followed him into the kitchen and opened the backdoor to let him out. He ran, tail wagging. After pushing past the cats in the bathroom doorway, I took a leak and brushed my hair and put on deodorant. Then I ambled into the kitchen and kneeled in front of the oven—after turning on the exhaust vent overhead—and lit a cigarette.

I turned on my phone and checked the news: a slaughter in Las Vegas. More than fifty dead. As many as five hundred wounded. The emptiness inside expanded, consumed me. Neurotransmitters flooded my brain. Chaos. Depression. Thoughts attempted to rise but nothing appeared. I pictured the dead and wounded, blood filling the streets, and my depression deepened.

What’s the point? What’s the point of any of this? We’re meat feeding on chemicals, motivated by chemicals, until these organic machines stop. Then we cease to experience anything. The universe, as far as we’re concerned, blinks out of existence the moment we no longer perceive, think, feel, experience. We’re meat machines fueled by desire, without objectives—desire, for us, acts as both the means and the end. But the chemicals permeating this meat persuades us we’re somehow only incidentally meat. We’re something greater, some say, far great. Not animals. Special.

I thought as much in my younger, idealistic days. But now I recognize I was a naïve fool intoxicated by desire. Now a different chemical intoxicates me, one producing a sensation we call despair. This chemical is a special breed, brewed from the ingredients of a lifetime of bad decisions and misplaced ambition. Looking back now, I realize I’m a somnambulist who slumbered through life, distracted by dreams and delusions coursing through the canyons in my brain.

This Vegas slaughter numbs me. Those poor people. Out for a good time and listening to music one minute, dead and dying and fleeing for their lives the next. What madness. A

few minutes of chaos destroyed so many. People with hopes and dreams, fears and ambitions and desires—gone. Those who survived, those left to pick up the pieces, will never be the same. That gunman murdered them, too. The ghosts of the people they once were fled their bodies when the shooting started. Now, though alive, they may look and sound the same, but they’re not the same. They’ll never be the same. He killed them, too, by altering them, by changing them, by rewiring their brains and forever changing the distribution and uptake of neurotransmitters flooding their brains at any given moment. It’s a shame the shooter’s dead. A quick death for scum like him is too humane. He deserved something far, far worse.

And what of the thousands on the strip who weren’t near the shooting? What of the tourists asleep in their rooms or gambling or staying up with their kids? Fear and paranoia will probably determine their behavior for the rest of the trip. The allure of Vegas, the bright lights and awe-inspiring buildings and activities—the gunman inflicted damage on them, too, at least for the people there right now, trying to make the most of a trip marred by unspeakable cruelty and violence.

I must leave for work soon, but I don’t want to go. I don’t want to do anything anymore. On finishing my cigarette, I force myself to my feet. Then I force myself outside, through the yard and to my car. Sitting in my car, I light a cigarette and turn on the radio. NPR. Audio from the chaos. Machinegun fire. Screams. Muffled noises. Terror.

I kill the radio. The sounds haunt me.

I live in Indiana but Vegas is my spiritual home. Our parents took us there on vacation twice when my sisters and I were kids. We spent the summer there in 1989 in a disastrous attempt to move there. I spent six weeks there in my early 20s in 2003, ostensibly to live there, but I was inexperienced and a coward, and I fled.

Since my son was born last year, Vegas obsesses me. I aspire to move there again. My wife, however, wants nothing to do with it. But her dismissal and insistence on not moving there haven’t curbed my fantasies. Too many fond memories of Vegas inform me. Too many lucid and happy childhood memories define the city for me.

Think of the suffering, the pain, the blood. Lives extinguished—and for what? No known motive right now. People are stunned and in shock and traumatized. How many lives forever altered? How many psyches destroyed? This gunman, despite his motive, destroyed the living as well as the dead.

Picture it, the absurdity: chemicals pump through sentient meat machines. Hundreds of these meat machines congregate to experience the sensation of vibrating air caused by machines designed to vibrate air. These vibrations trigger pattern recognition in the meat machines. These patterns stimulate the production of chemicals, altering the meat, creating sensations they interpret as pleasing, euphoric, intoxicating. 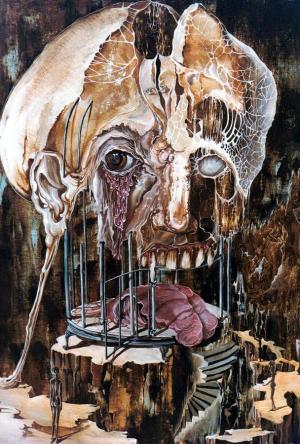 The Deterioration of Mind of Matter, Otto Rapp, 1973

This collection of meat congregating to absorb vibrations in the air that stimulates the production of chemicals break and explode, scatter and release chemicals to increase their chances of survival. Some meat remains sentient while other meat machines cease to exist. The reason? A meat machine producing a different combination of chemicals ignited a mixture of charcoal, sulfur, and saltpeter in a metal tube. This controlled explosion projected a piece of lead at high velocity with the sole intention of destroying meat and rendering meat machines no longer functional.

Then a meat machine unreceptive to other meat machines’ perceptions of themselves terrorizes, injures, and destroys them.

What an absurd, meaningless world.

What a wonderful world.

Daulton Dickey is a novelist, poet, and content creator currently living in Indiana. He’s the author of A Peculiar Arrangement of Atoms: Stories, Still Life with Chattering Teeth and People-Shaped Things, and other stories, Elegiac Machinations: an experimental novella, and Bastard Virtues, a novel. Rooster Republic Press will publish his latest novel, Flesh Made World, later this year. Contact him at daultondickey[at]yahoo[dot]com.